The Jamaica North-South Highway project has been realized through friendly negotiation between the Government of Jamaica (GOJ) and China Harbour Engineering Company Limited (CHEC). It is the centerpiece of a multi-year Millennium Projects Programme initiated by the Government of Jamaica with the main objective being to upgrade the country’s infrastructure and assist in providing economic opportunities for growth and the creation of jobs.

The project commenced in December 2012. The first section of the highway opened to motorists was Section 2 on August 5, 2014 and collection of toll fares commenced on the 6th day of September 2015.

This Section of the highway consists of a hard shoulder, slow & fast lanes as well as truck lanes in some areas with several interchanges. The entire leg of the Highway was officially opened on the 23rdMarch 2016. 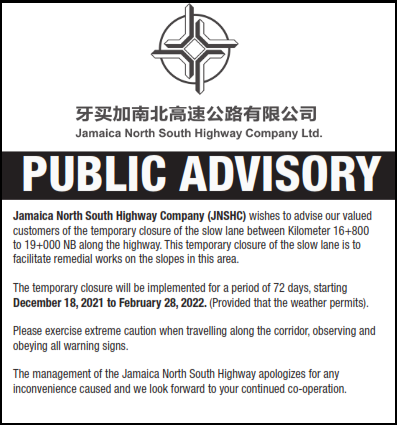