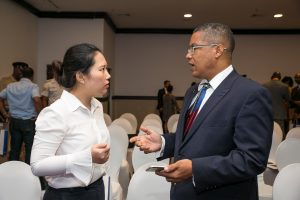 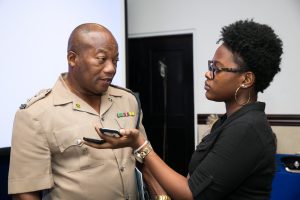 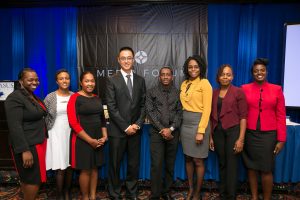 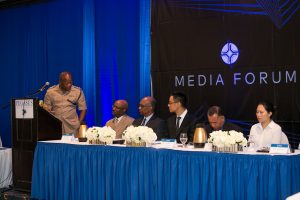 Today I would like to talk to you about the impact and opportunities which have been created by the Highway and the long term benefits that we believe will accrue to the nation.
As I have often said the dream of a roadway which would save us from the flooding of the Bog Walk Gorge, relieve us of the blockages on Mt. Rosser was with us for a long time, not 7 years, not 10 years, not twenty years, it been more than 40 years. This dream has been with us since 1966 when the then Minister of Communications announced the first study for a “Cross Country Highway”
But why did this project become such an obsession, what are the benefits that can be expected for our country, how will this create jobs, how will this impact on our GDP. How will change the country?
Over the years because of the natural topography of Jamaica and because ships were the early forms of transportation all our major towns have developed either along the North or the South Coast of Jamaica. This mountain which runs through the backbone of Jamaica from East to West created a natural divide across the country.

With the Highway all of this will change:

1. Let’s look at our Visitors and what they see
Currently Jamaica has in excess of 3.5 Million visitors each year coming to Jamaica. Currently the large majority of these visitors come into Ocho Rios, MoBay, Negril and Port Antonio and stay there.
Previously it would have been unlikely for these visitors to leave the North Coast. For our cruise ship passengers this would be almost an impossibility. Today this is now possible.
Let’s imagine of that number let’s say 2000 of these visitors taking a day trip to the South Coast, this would mean 40 to 60 bus loads of persons coming to the
a. Culture Yaad in Trench Town for a reggae party.
b. Port Royal
c. Rockfort Healing Waters
d. Devon House
e. Craft Market and Souvenir shops

Imagine 40-60 bus loads of visitors in the city.
By the way how would we feed 2000 persons, obviously Tastees, or Juci Beef or Mothers couldn’t handle the numbers.
Not only are we talking about persons who do a one-day trip but we recently heard the reports about the GOJ signing an MOU with Airbnb and about more and more visitors coming into Trench Town and Greenwich Town.
Think about the impact that that would have on persons who work in these facilities and the families of these persons, what if these persons spent US$50 per day, this would be equivalent to US$36 M per year or JAD$4.6 Billion into the economy.

B. WHERE PEOPLE LIVE
2. Let’s look next at where people live:
Not only will the Highway impact on our visitors but as as we have seen on the East-West Highway large developments are being established all along the Highway. The Highway is changing where people live
Based on our experience what we expect is that housing will begin to be developed in Bogwalk and Linstead similar to what we have in Old Harbour and Longvillethousands of persons arenow able to live outside of town and commute to work in the morning.
Currently there is regular JUTC bus service from Longville and we anticipate the same being developed for the communities of Ocho Rios Ewarton Linstead and Bog Walk. No longer would persons have to leave their house in the country to live in Kingston in order to work or go to school

Another area that we don’t often remember is the impact that the Highway is expected to have on accidents.
Accidents
Just yesterday it was reported that the direct annual costs associated with crashes was approximately 1.4B per annum and the indirect costs some JAD$1.8 Billion per annum bringing to a total of some $3.2 Billion per annum
Not only does the Highway reduce the likelihood of all accidents it eliminates the likelihood of head on crashes which are the deadliest of crashes, and not only does it reduce crashes on the Highway but it also reduces the traffic on the old roads thereby also reducing the likelihood of crashes on these roads as well.

Actual Signs
Are there any signs of all of this happening? Let look for a minute at what has been happening on the Highway since opening.
Travel Time
Let’s look at the vehicle moving between the various points on the Highway to Bog Walk, Linstead, Ewarton, Moneague and the travel time savings, currently driving from Ocho Rios to Caymanas the typical motorist will save 45 minutes on the Journey. On the other legs of the Highway less time.
Currently we estimate that the savings is working out at more than 8000 man hours per day.
This is equivalent to another 1000 persons working in the workforce.

Before and After Highway
How are Traffic Numbers changing since the Highway?
In 2014 before the Highway opened there were approximately 6,100 vehicles using the Mt. Rosser Road. When the Mt. Rosser Bypass opened this number split 3,078 on the old road and 3,024 on the New Mt. Rosser Bypass. Approximately 50% of the persons were choosing to use the Mt. Rosser Bypass.
Since the opening traffic on the New Mt. Rosser Bypass has grown by approximately 70% percent over the three years. Here I am only referring to the Mt. Rosser section of the Highway.
But more significantly total traffic both on the tolled road and on the old road has grown by more than 48%over the three-year period. In the last year alone (2016-2017) total traffic has grown by more than 21% per annum. This rate of growth compares to about a 6% growth of traffic on the Mandela Highway for example.
What this shows is that more people are travelling. Persons who would not have travelled from the North Coast to the South Coast are travelling, persons who used to make one trio are now making two and three trips.

E. EMPLOYMENT AND GDP
How does this translate to employment and impact on the economy?
Let’s tie all of this together, the original H2K studies suggested that when the Highway was completed including the legs to Montego Bay the total number of jobs created by the Highway would amount to some 54,000 jobs in the short term and some 119,000 jobs in the long term.STATIN reported earlier this year that Jamaica employed Labour force was 1.18 M persons. This additional level of employment generated by the Highway development represents 10% of the labour force. We believe that with the changes made these benefits will be even greater.
These same studies suggested that the Economic Impact could be just as significant 3% added to our GDP in the short term and up to 5% in the long term.

Conclusions
When we think about the contribution that the Highway is making it is not just about the next 5 years or even the next 10 years. As Cory Booker said If we are to build an economy to last we must invest in what will fuel us for generations to come. This is what we are doing investing for generations to come.
We believe our Highway will change the face of Jamaica for generations to come, where people live, where they work and where they vacation will forever be changed.
So to paraphrase the former US President Roosevelt, we ask for forgiveness from those who could have done it better, we know that we often stumble, but we believe in this worthy cause, it is not often that you get the chance to change the face of a nation forever.